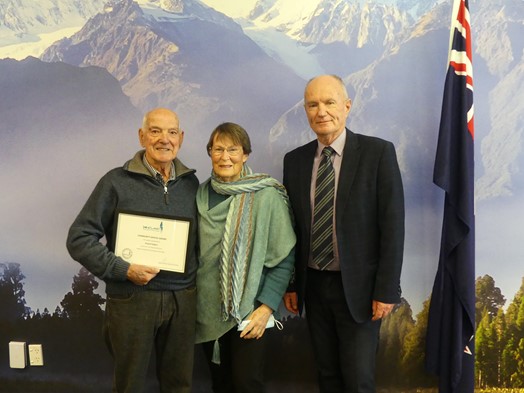 January 2022 was the end of an era, with the retirement of Howard Hughes from maintaining the Hokitika Town Clock for 47 years. Today Mr Hughes received a Community Award in recognition of his many years of service.

Mark Dixon, Facilities, Property and Compliance Manager says, “I cannot speak highly enough of Howard personally and his endeavours over the years. I consider Howard to be a true gentlemen, old-school in not accepting recognition for years of unpaid public service.

As part of a hand over I observed Howard conducting the last service which I found very enlightening, with some detail he explained the working history of the clock along with the intricate details of how the mechanisms worked and kept time. I was unware that the clock tower was synchronised with the old telephone exchange clock and when removed, Howard’s son built an electronic synchronizer so the town clock now keeps perfect time.”

Foundations for the clock tower were laid on 14 February 1902, and include a time-capsule foundation stone laid by Prime Minister Richard Seddon. Built of Oamaru limestone, the clock is officially a memorial to those who served in the Boer War, and the coronation of King Edward VII. It was described at its opening in June 1903 as “…a new monument to our brave fallen soldiers and a memorial to King Edward II, and a lasting credit to the high and generous feeling of the people of Westland…”.

Over the years suggestions to move the clock to alternative sites were unsuccessful. There were near-misses in 1922, when Council deferred consideration and in 1926 when it was proposed to erect the clock at the Government Buildings and the tower in Cass Square. In 1957 Council considered demolishing the clock due to severe maintenance issues, which lead to a petition of 443 signatures against removing the clock. This outrage resulted in an ode by “By Gum” appearing in the local paper:

Facing to the Westwards, Northwards, Southwards
And Eastwards too, to the far mountain chain
Standing at a Busy intersection,
Lifted there in civic pride, joy and pain --
To mark a worthy Monarch’s coronation.

In memory of Wars’ immortal slain
Some there are with pride who build and cherish
Others, like vandals, seek to destroy,
And erstwhile neglectful city father
Now wily schemes to dodge the price employ.

Take heed my fellow townsmen, and beware!
To your heritage and old friend, stand fast.
Save our beloved clock from the destroyer,
This living symbol of the glam’rous past.

“Howard Hughes certainly took heed, and has done a fantastic job keeping the clock ticking,” says Deputy Mayor David Carruthers. “Without community minded people like Howard, the town would be less vibrant, or works would cost everyone a lot more. He has made an outstanding contribution to the community, and I was very pleased to have the opportunity to present him with a highly deserved Community Award at today’s Council meeting.”